A name popular with surfers to describe the East of El Salvador. Home of probably the best beaches in the country, some still completely untouched. While most of the beaches can be reached with any sedan, this is the part of the country where we recommend a 4WD car to fully experience it.

An hour and a half on a 4 lane highway from San Salvador you’ll find the Lempa river, the largest in El Salvador, currently crossed at the Litoral highway by the 1200 ft. long San Marcos Lempa bridge. Cross this bridge and welcome to Oriente, the east of El Salvador. The Wild East is known for its beautiful sandy flat beaches, and world class surf spots. We wanted to give you a few ideas of what to do, where to stay, and where to eat. 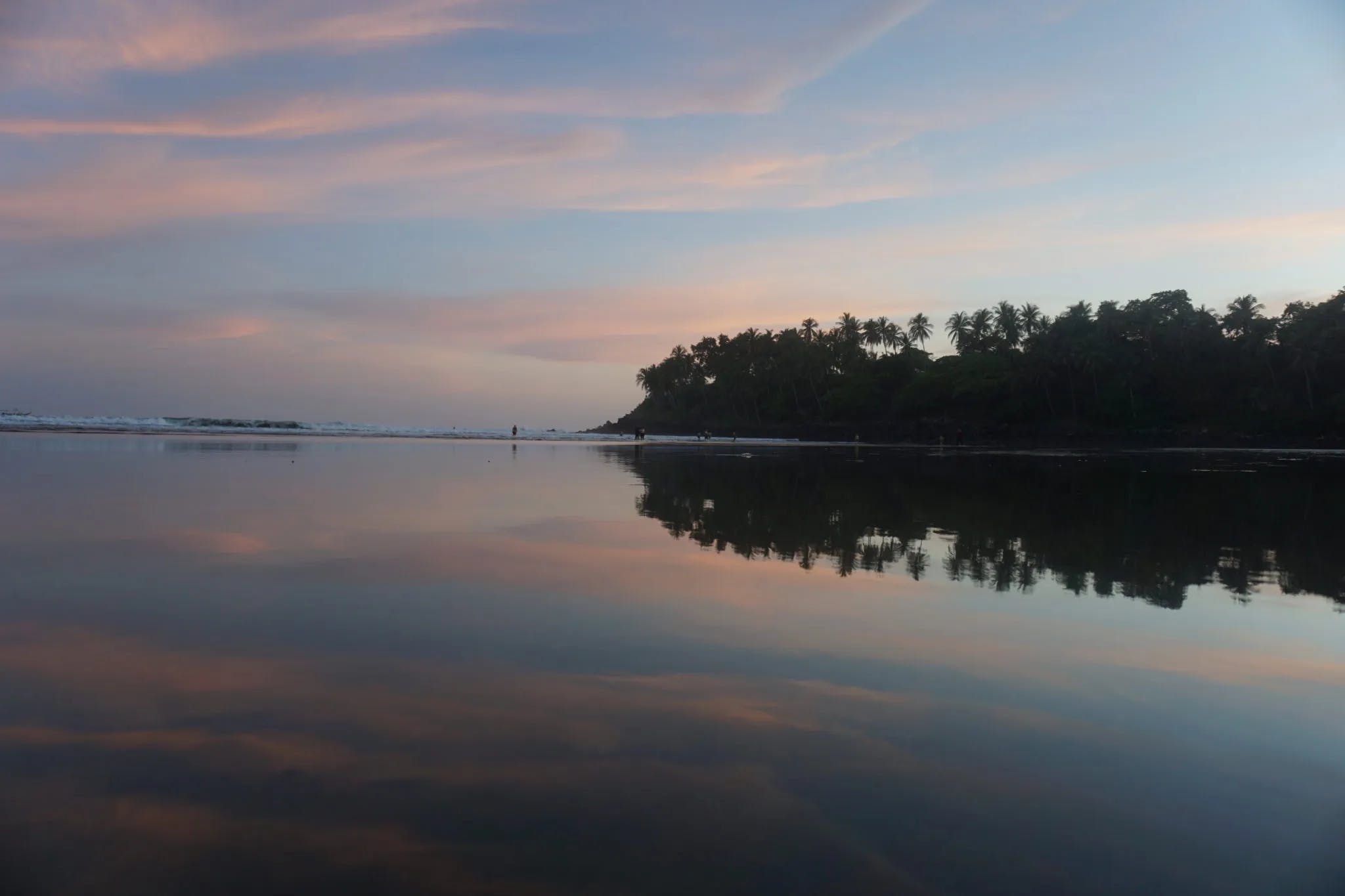 El Cuco beach in San Miguel is home to most restaurants in the eastern beaches of El Salvador and it’s a good spot to stop for lunch after a 3 hour drive from the city. There’s a bunch of places to choose from, but we recommend making a right and getting to The Black Pearl restaurant, at Vista las Olas Surf hotel. The Black Pearl has good wifi, a great menu of salvadoran favorites with a modern twist, and a good well stocked bar. Our picks? Try their Margarita. It’s a welcome refreshment after the road, made with fresh limes and nothing bottled but the Tequila and triple sec. Drink up some water and keep hydrated cause it’s always summer and the sun is strong on the eastern shores.

As far as food they have a solid menu, I’m always partial to seafood rice dishes and their seafood risotto (arroz de mariscos) is great and it’s a different recipe from the standard one you can find in most places. Last time we went with a big group and had a great experience there so we went for lunch the next day as well.

After lunch head out to your first beach of choice, they’re all great. Stay at Cuco, or better yet drive to Las Flores. Playa Las Flores is amazing, especially during low tide. It’s a black volcanic sand beach, and it’s totally flat, so during low tides and sunsets you experience an amazing view of the sunset reflecting on a mirror-like wet sand creating a beautiful scene pictured above. The photo is 100% unedited.

Depending on your budget there’s two places to stay. If you prefer a high-end all-inclusive beach and surf resort that’s beachfront, we recommend Las Flores Resort. Having said that, just a short 2 minute walk, on the second row from the beach, you’ll find Hotel Martinez which offers good accommodations at a reasonable price. Good food and a pretty place, affordable prices (around $100/night) and just a short stroll to the beach. Big surfer spot.

﻿Keep heading out to Punta Mango, stay and eat at Punta Mango Surf Resort. A small beachfront surfer’s paradise. Enjoy a drink at their beachfront bar with a great choice of drinks and a Nuova Simonelli espresso machine to get a great start to your day. Their breakfasts are great, good WiFi to keep in touch, and overall a chill atmosphere. Take a boat straight out from the beach and go explore the great waves around the area with your surfboard, and they’ll rent you one and even get you an instructor if you want to try it out for the first time. There’s many great beaches, even secret beaches, that have property available for sale on them. Beachfront lots for a home, or enough land for a resort, we have you covered. 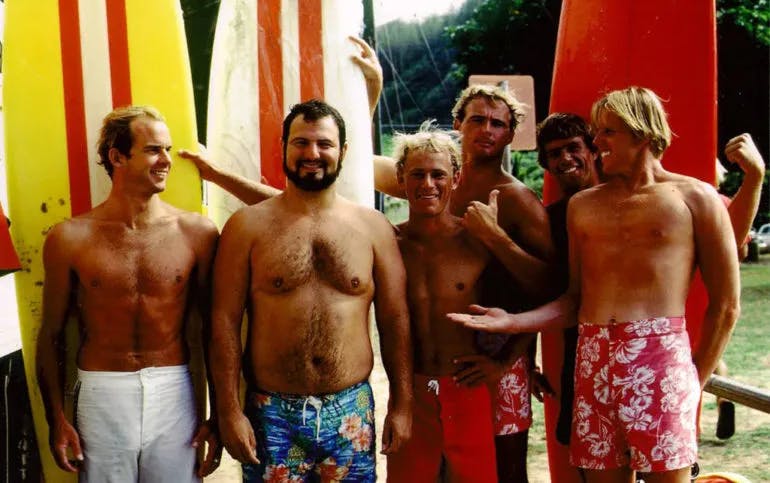 Moving back to the beaches of La Libertad, and Surf City, you can find the best seafood nachos ever, and one of the craziest surf stories ever. 1978. Jimmy Carter was president of the United States, the first print of the newspaper comic Garfield was hitting newsstands, and El Salvador was about to start its 12-year civil war (peace accords were reached and signed in 1992 ending it). Meanwhile stepping on a plane bound for El Salvador you´ll find Gary Busey, John Milius the film’s director and the rest of the cast of the surf cult classic movie: Big Wednesday.

In order to do justice to the story I’ll just leave here an excerpt from a 2008 Sports Illustrated interview with the film’s director: John Milius.

“ Filming for the action sequences began with a two-month stint in El Salvador, with the right point at El Sunzal serving as a nice empty stand-in for Malibu.

“With our encyclopedic knowledge of the world’s waves, we decided there were a couple of surf points we could use there,” Milius recalls in an interview with Sports Illustrated. “But we simply didn’t take into account things like, oh, sharks and civil war”

By most accounts, the trip was a disaster. Cameras were stolen and the whole crew got sick, but in the end, it was an encounter with local guerillas that really sent them packing.

“One day this El Salvadoran militia comes to visit our beach set,” continues Milius. “We had a helicopter [for filming] and all these fit surfers with really short haircuts, so these guys figured we were CIA, U.S. military or something. We had to convince them otherwise. Hell, we offered to smoke dope in front of them just to prove we were surfers. And just when they were finally convinced, out of the water comes one of our surfers, Dan Merkel, with his skin suit on and a knife strapped to his leg. Those [guerrillas] looked at him and absolutely freaked. They were sure this guy was a SEAL!””

In the end, the trip set the production back half a million dollars and yielded just four minutes of usable footage. ” If that brief encounter hadn’t happened, the history of surfing in El Salvador would have turned out very differently.

Keep in mind this was 1978, and nowadays El Sunzal is mostly known for its hotels and restaurants. There’s many places there you can visit yourself and have a great time nowadays but, if you like nachos go to Cadejo Brewing Company and order Nachotes de Zeus (Zeus’ Big Nachos). Only the one in El Sunzal, La Libertad, as you won’t find them in their city locations. Why are they called that way? We have no idea but honestly, best nachos we’ve ever tried. They’re quite simple really. Freshly fried tortilla chips, fish ceviche, shrimp & calamari rings cooked in garlic butter, chipotle mayo and lots of melted gooey Quesillo, a local mozzarella-type cheese. It’s in the western shores of the country, but we had to mention it. They’re that good. Try them with your choice of local craft beer or hard seltzer. The passion fruit (maracuya) hard seltzer is amazing.

Hope you have a great time visiting this lovely country and experience our best beaches and gastronomy, and learn about a crazy story or two while you wait for the next wave. 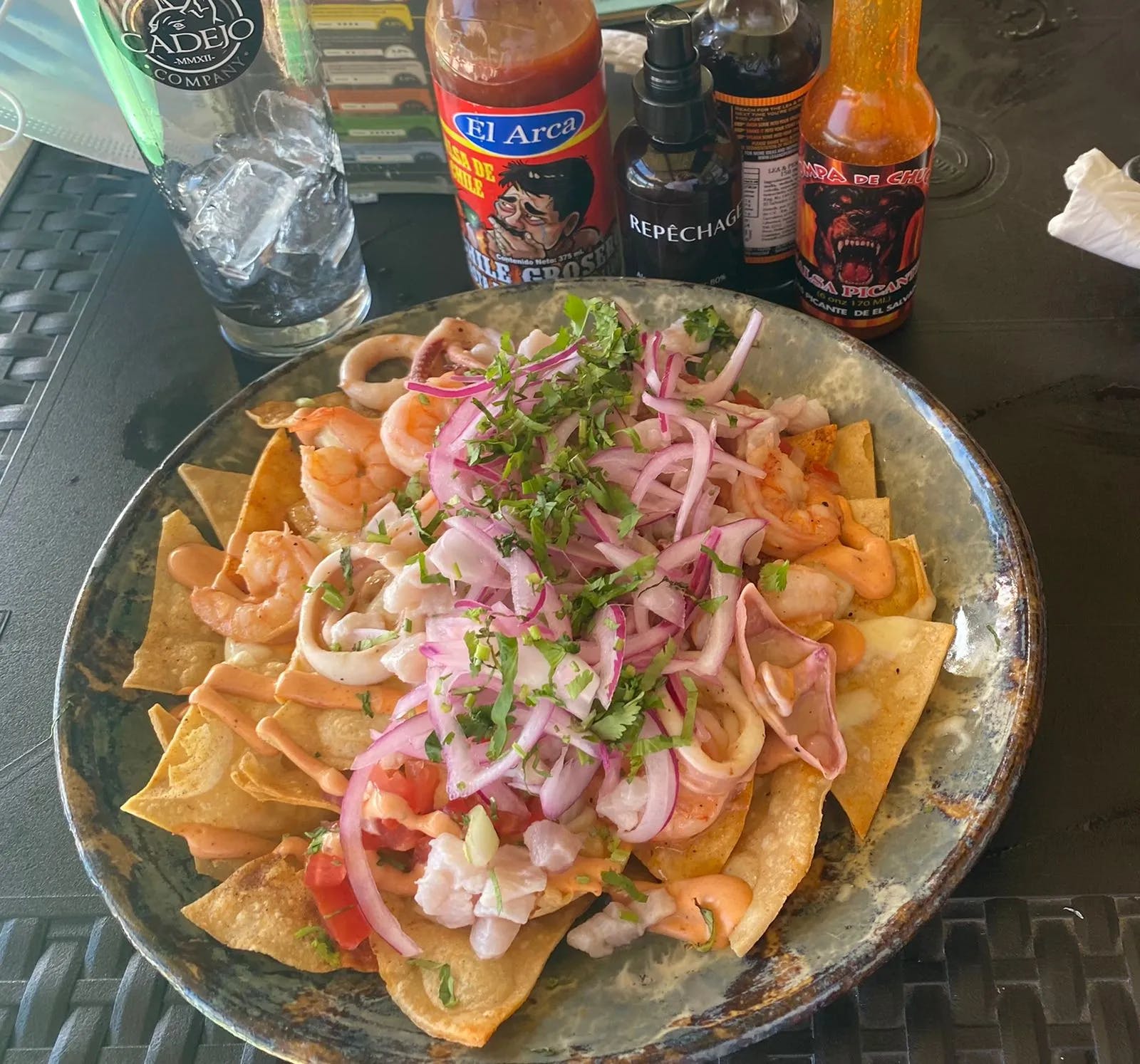